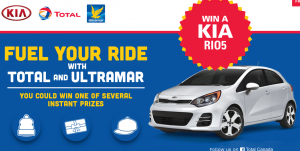 Total Canada – Fuel Your Ride With Total and Ultramar – Win a new fully equipped KIA RIO car valued at $20,000 OR 1 of 210 Instant prizes

CONTEST RULES
FUEL YOUR RIDE WITH TOTAL AND ULTRAMAR Contest

The information you share will be used only for contest administration purposes and will
be used in compliance with Total Canada’s privacy policy. Any questions, comments or
complaints about this contest must be addressed to Total Canada.

1. CONTEST AND CONTEST PERIOD
The FUEL YOUR RIDE WITH TOTAL AND ULTRAMAR contest (hereinafter called
the “contest”) is held by Total Canada (the “sponsor”) and takes place in Canada at
participating Ultramar locations. The contest begins on February 16, 2017 at 1:00pm
EST and ends on March 28, 2017 at 11:59pm EST. (The “Contest Period”).

2. ELIGIBILITY
The contest is open to residents of Quebec, Ontario, the Atlantic provinces (New
Brunswick, Prince Edward Island, Nova Scotia) and Newfoundland and Labrador
having reached the age of majority where they reside at the time of entering the
contest. The following people are excluded from the contest: employees, agents,
representatives, directors and officers of the sponsor, its affiliated companies and
dealers, their respective advertising or promotional agencies, this contest’s
applicable prize and service providers, as well as immediate family members (father,
mother, brother, sister) of any of the aforementioned parties, their legal or commonlaw
spouse, and any other person with whom these people reside.

3. HOW TO ENTER WITH NO PURCHASE REQUIRED.
To enter the contest, visit a participating Ultramar location. The contest website
address and the entry password will be displayed on posters there. The contest
website and the entry password will also be available on the Total Canada Facebook
page (www.facebook.com/TotalCanada/). By visiting the contest website, you must
complete the entry form and write the password, indicate your last name, first name,
full mailing address including your postal code, your phone number with area code
and your email address. Declare that you have read and complied with the contest
entry rules by checking the appropriate box and click on “Submit”.
You will be eligible to receive one (1) entry to the contest (an “entry “), subject to your
compliance with these official contest rules (as determined by the sponsor). In order
to be eligible, your entry must be submitted and received according to these official
rules during the contest. There is a limit of one contest entry per person per
registered email address for the duration of the contest. If a person registers two (2)
times or more, only the first entry received from this person will be considered.
Entries are subject to verification, and they will be declared null if they do not comply
with these rules.

4. QUALIFICATION
By entering the contest, each entrant asserts and warrants that their entry complies
with the contest rules and conditions. Any entry that does not comply with the rules
as defined will be disqualified and will not be taken into consideration. 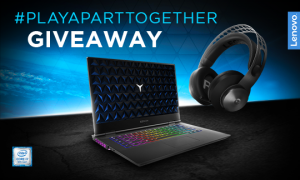 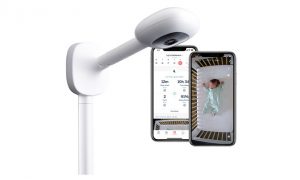