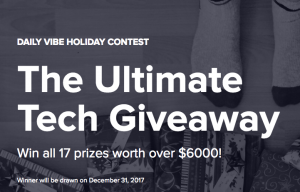 Techvibes Inc. is the “Sponsor” of this contest. No purchase is necessary to enter or win this Contest. Purchase of any Techvibes product or service will not increase your chance of winning.

Eligibility
1.The Techvibes Daily Vibe Giveaway (“Contest” or “Giveaway”) is open only to: (i) natural persons who are Canadian residents (but excluding residents of Quebec); (ii) who are over the age of majority in their province/territory of residence at the time of entry; (iii) who are a valid and active subscriber of Techvibes at 9 a.m. Eastern Standard Time on the morning of the Draw; and (iv) who responded affirmatively to the Contest entry button contained in an email to them or at www.techvibes.com/daily-vibe-giveaway (each being an “Eligible Subscriber”). An Eligible Subscriber who is also the first person to refer a new Eligible Subscriber will be automatically entered in the Draw for an additional five chances to win the Draw per unique Eligible Subscriber they refer, up to a maximum of fifty (50) referrals (which means such party will have two hundred and fifty (250) additional chances to win). Any individual person may hold up to a maximum of three Eligible Subscriber accounts using three unique and bona fide email addresses (such as work, personal, and other) which are used for bona fide purposes and have not been created for the purpose of participating in this Contest. Each Eligible Subscriber will be entered in the Contest. Employees, representatives and agents of Techvibes Inc. (“Sponsor”), and its parent companies, affiliates (including, without limitation, Konrad Group Inc., BrainStation Inc., and Quantum Coffee Corporation), and advertising and promotion agencies, as well as the immediate family members (spouse, children, parents and siblings) and those living in the same household of such employees, representatives and agents are not eligible to enter. This Contest is void where prohibited by law. We regret that residents of Quebec are not eligible to participate in this Contest but we anticipate they will be eligible for subsequent contests we have planned.

How to Enter
2. Each Eligible Subscriber will be entered in the Contest for the Draw, subject to these Official Rules. Sponsor is not responsible for any lost, late, illegible, incomplete, falsified, destroyed, or failed entries, or for any electronic miscommunications or failures of any kind, which may limit an entrant’s ability to participate in this Giveaway. Proof of submitting an entry is not proof of receipt by Sponsor. All entries become the property of the Sponsor and will not be acknowledged or returned. Any and all lost, late, illegible, incomplete, falsified, destroyed, or failed entries will be disqualified. No purchase is necessary to enter or win, and a purchase of any Techvibes products or services will not increase the odds of your winning.

The Prize
There will be a single prize (the “Prize”) awarded to a single winner which consists of the following bundle of items with a total retail value of $6,451 (excluding tax):

3. The Prize will be awarded on the Draw Date of December 31, 2017. On the Draw Date a random drawing from the names of all Eligible Subscribers will be conducted. The first entrant whose name is drawn on the Draw Date and who otherwise complies with these Official Rules will be eligible to win the Prize. The chance of being selected will depend on the number of eligible entries registered for the Draw and whether an entrant has gained any additional chances to win as described in section 1 above.

Prize Draws
4. The Prize will be selected by random electronic draw at 12 noon Eastern Standard Time on December 31, 2017 from the Main Office of Techvibes Inc. at 469 King Street West, Toronto, Ontario M5V 1K4. Sponsor will make reasonable efforts to contact the winner by the email associated with their entry within five (5) business days following the date of the draw. If the potential winner cannot be contacted within the time specified above, does not complete the necessary eligibility forms including proving their place of residence (outlined below) within five (5) days of his/her being informed of his/her name being drawn, does not correctly answer the mathematical skill-testing question, is not otherwise an eligible entrant, or does not otherwise comply with the Official Rules, he/she will not win any prize. In this event, the prize will be awarded to an alternate entrant, who will be selected from among the remaining eligible entries. Any alternate winner will have the same rights and obligations as the original winner. To claim a prize, a potential winner must comply with the Official Rules for this Giveaway, must correctly answer unaided a time-limited mathematical skill-testing question administered by Sponsor and must fill out and return a Declaration and Release, including a Publicity Release, in a form to be provided by the Sponsor, within ten (10) days of his/her being informed of his/her name being drawn. Prizes will be delivered to the confirmed winner. Once verified and awarded, the name of the winner will be announced and published on techvibes.com.