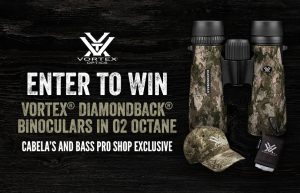 2. ELIGIBILITY: Not open to residents of Quebec. In order to be eligible to enter into the Contest, an entrant must be a legal resident of Canada, who is at least the age of majority in his/her province or territory of residence at the time of entry.

3. Employees, representatives and agents of Cabela’s Retail Canada, Inc. and its parent companies, subsidiaries, affiliates, contractors, distributors, retailers, advertising and promotion agencies, and any others engaged in the development, production, execution or distribution of this Contest as well as the immediate family members of the aforementioned persons (parents, children, siblings and/or spouse, regardless of where they live) and anyone with whom they are domiciled, whether related or not, are not eligible to participate in this Contest. VOID WHEREVER PROHIBITED BY CANADIAN LAWS.

6. GRAND PRIZE: One (1) winner will be awarded one (1) Vortex Diamondback Binoculars in 02 Octane Camo, One (1) Vortex Realtree Max-1 XT Cap, One (1) Vortex Pudz Cleaning Cloth. The prize is non-transferable and non-assignable. No cash alternative nor substitute to the Grand Prize will be offered, however, Sponsor reserves the right, at its sole discretion, to substitute a prize of equal or greater value if the advertised prize is not available. EACH PRIZE WILL BE MADE AVAILABLE ONLY TO THE IDENTIFIED WINNER.

8. SKILL-TESTING QUESTION: The selected entrant must correctly answer a mathematical skill-testing question, unaided (by electronic or mechanical device or otherwise) prior to being awarded the prize.

9. PUBLICITY RELEASE: Except where prohibited by law, the winner agrees that Cabela’s Retail Canada Inc. and/or its agents may use the winner’s name, picture/portrait, likeness and voice, for advertising and promotional purposes without further consideration, notification or permission.

10. GENERAL RULES OF PARTICIPATION: This Contest is subject to all applicable federal, provincial and local laws. By participating, entrants agree to be bound by these Official Contest Rules and the decisions of Sponsor and waive any right to challenge the decision of the Sponsor regarding any claim of ambiguity in the Contest or these Official Rules, whose decision shall be binding. To the extent permitted by law, Cabela’s Retail Canada, Inc. and its parent companies, affiliates, subsidiaries, retailers, agencies as well as each of their respective officers, directors, employees, representatives and agents (collectively, the “Releasees”), shall not be liable for distorted, incomplete, illegible, undelivered, damaged, or lost entries; and/or any delays or disruptions beyond their reasonable control. Sponsor may prohibit an entrant from participating in the Contest or winning a prize if, in its sole discretion, it determines that said entrant is attempting to undermine the legitimate operation of the Contest by cheating, deception, or other unfair playing practices or intending to annoy, abuse, threaten or harass any other entrants or Sponsor. If for any reason this Contest is not able to be conducted as planned, including, but not limited to, by reason of tampering, unauthorized intervention, fraud or any other causes beyond the reasonable control of Sponsor which corrupt or affect the administration, security, fairness, integrity or proper conduct of the Contest, then Sponsor reserves the right at its sole discretion to cancel, terminate, modify or suspend the Contest and/or randomly draw from those entries received up to the cancellation/suspension date. CAUTION: ANY ATTEMPT BY AN ENTRANT TO DELIBERATELY UNDERMINE THE LEGITIMATE OPERATION OF THE CONTEST MAY BE IN VIOLATION OF CRIMINAL AND CIVIL LAWS AND SHOULD SUCH AN ATTEMPT BE MADE, SPONSOR RESERVES THE RIGHT TO SEEK REMEDIES AND DAMAGES (INCLUDING LEGAL FEES) FROM ANY SUCH ENTRANT TO THE FULLEST EXTENT OF THE LAW, INCLUDING CRIMINAL PROSECUTION. SPONSOR RESERVES THE RIGHT TO DISQUALIFY ANY PERSON FROM THE CONTEST AND FROM ANY FUTURE CONTESTS FOR ANY VIOLATION OF THESE

RULES OR ACTIONS IMPACTING THE INTEGRITY OR FAIRNESS OF THIS OR OTHER CONTESTS CONDUCTED BY SPONSOR.

12. DISCLAIMER: Entrants are solely responsible for their own actions relating to this Contest, including, without limitation, their participation in the Contest and their acceptance and/or use or misuse of a prize. By participating in this Contest, all entrants agree to release, defend and hold harmless the Releasees from and against any liability arising, directly or indirectly, in connection with the Contest and/or use or misuse of the prize or elements thereof.

13. PRIVACY: Entries submitted as part of this Contest will become the property of Cabela’s Retail Canada Inc., upon submission and will not be returned to entrants. Personally identifiable information submitted by entrants as part of this Contest will be collected, held, used and/or disclosed for the purpose of administration of the Contest in accordance with the Cabela’s Canada Privacy Policy available at http://www.cabelas.ca/pages/privacy. The Contest entry serves as the entrant’s authorization, if the entrant so consents, to receive future marketing communication from Cabela’s Retail Canada Inc., as provided on entry. In the event that the entrant consents to receiving marketing communications and chooses to opt out of future

14. WINNER LIST: The name of the winner of this Contest will be made available upon written request by mailing a self-addressed and stamped request to Cabela’s Retail Canada Inc., Attn: Cabela’s Vortex Sweepstakes Winner List, 25 De Baets St., Winnipeg, MB R2J 4G5 to be received no later than July 31, 2019.