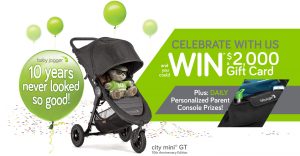 2. ELIGIBILITY:
The Promotion is open to legal residents of Canada who have reached the age of majority* or older in their province or territory of residence at the time of entry, except employees, representatives or agents (and those with whom such persons are domiciled, whether related or not) of Brands in Motion Inc., Baby Jogger (collectively, the “Sponsor”), their respective parent companies, subsidiaries, affiliates, prize suppliers, advertising/promotion agencies and any other entity involved in the development, production, implementation, administration, judging and/or fulfillment of the Promotion (collectively, the “Promotion Parties”).

There is a limit of one (1) Entry per person per Daily Entry Period and and total limit of thirty-six (36) Entries per person throughout the Promotion Period. If it is discovered by the Sponsor or Administrator (using any information and/or evidence available to the Sponsor and Administrator) that any person has attempted to: (i) exceed any of the limits stated in these Rules; and/or (ii) use (or attempt to use) multiple names, identities, email addresses, accounts and/or any automated, macro, script, robotic or other system(s) or program(s) to enter or otherwise participate in or disrupt this Promotion; then (in the sole and absolute discretion of the Sponsor and Administrator) he/she may be disqualified from the Promotion and all of his/her Entries voided. An Entry will be rejected if (in the sole and absolute discretion of the Sponsor and Administrator) the corresponding Form is not fully completed with all required information and submitted and received during the Promotion Period. The Releasees (defined below) are not responsible for late, lost, misdirected, delayed, incomplete or incompatible Forms (all of which are void).

5. THE PRIZES AND THEIR RESPECTIVE APPROXIMATE RETAIL VALUE:
There is one (1) grand prize (the “Grand Prize”), which consists of a CAD $2000 [insert type of gift card] gift card (subject to the terms and conditions of the issuer). Without limiting the generality of the foregoing, the following terms and conditions apply to the Grand Prize: (i) the Grand Prize must be accepted as awarded and is not transferable, assignable and/or or convertible to cash (except as may be specifically permitted by the Sponsor in its sole and absolute discretion); (ii) no substitutions except at Sponsor’s option.

Collectively, the Grand Prize and the Daily Prizes may be referred to as the “Prizes”.

Each Prize will only be awarded to the person associated with the applicable selected Entry (see below for details). There is a limit of one (1) Daily Prize per person/email address.

BEFORE BEING DECLARED A CONFIRMED PRIZE WINNER: each potential Prize winner will be required to: (a) correctly answer a mathematical skill-testing question without mechanical or other aid (which may be administered via email or the Sponsor’s declaration and release form, as determined by the Sponsor at its sole discretion); and, (b) sign and return within two (2) business days of notification the Sponsor’s declaration and release form, which (among other things): (i) confirms compliance with these Rules; (ii) acknowledges acceptance of the applicable Prize as awarded; (iii) releases the Promotion Parties and each of their respective agents, employees, directors, successors, and assigns (collectively, the “Releasees”) from any and all liability in connection with this Promotion, his/her participation therein and/or the awarding and use/misuse of the applicable Prize or any portion thereof ; and (iv) agrees to the publication, reproduction and/or other use of his/her name, voice, statements about the Promotion, and/or photograph or other likeness without further notice or compensation, in any publicity or advertisement carried out by or on behalf of the Sponsor worldwide, in perpetuity and in any manner and media whatsoever, including print, broadcast or the internet, including, without limitation, announcing him/her as a confirmed Prize winner on Facebook.

7. GENERAL CONDITIONS:
All Entries and Forms become the property of the Sponsor. This Promotion is subject to all applicable federal, provincial and municipal laws. The decisions of the Sponsor with respect to all aspects of this Promotion are final and binding on all entrants without right of appeal, including, without limitation, any decisions regarding the eligibility or disqualification of Forms, Entries and/or entrants. By participating in this Promotion, you are agreeing to be legally bound by the terms and conditions of these Rules.

By entering the Promotion, each entrant hereby fully discharges and releases, indemnify and hold harmless the Releasees from any and all claims, demands, actions or causes of action for damages, loss, death or injury, howsoever arising, which each entrant, his/her heirs, executors and administrators may now or hereinafter have against the Releasees related to, arising out of, or resulting from the Promotion or his/her participation in the Promotion or winning a Prize (if applicable), including all damage, loss and injury which may be sustained by an entrant as aforesaid and all effects and consequences thereof.

The Releasees will not be liable for: (i) any failure of the Website or the Application; (ii) any technical malfunction or other problems relating to the telephone network or lines, computer on-line systems, servers, social media platforms, access providers, computer equipment or software; (iii) the failure of any Form or Entry to be received or recorded for any reason, including, but not limited to, technical problems or traffic congestion on the Internet, at any website; (iv) any injury or damage to an entrant’s or any other person’s computer or other device related to or resulting from participating in the Promotion; and/or (v) any combination of the above.

In the event of a dispute regarding who submitted an Entry, Entries will be deemed to have been submitted by the authorized holder of the email address submitted at the time of entry. “Authorized account holder” is defined as the person who is assigned an email address by an internet provider, online service provider, or other organization (e.g. business, educational institute, etc.) that is responsible for assigning email addresses for the domain associated with the submitted email address. An entrant may be required to provide proof that he/she is the authorized account holder of the email address associated with the applicable Entry and, if requested by the Sponsor, that he/she has all necessary consents, permissions and/or licenses as required by these Rules.

By entering this Promotion, each entrant expressly consents to the Sponsor, its agents and/or representatives, storing, sharing and using the personal information submitted with his/her Form only for the purpose of administering the Promotion and in accordance with Sponsor’s privacy policy (available at: http://babyjogger.ca/en/privacy-policy). This section does not limit any other consent(s) that an individual may provide the Sponsor or others in relation to the collection, use and/or disclosure of their personal information.

The Sponsor reserves the right, subject only to the approval of the Régie, and without prior notice to any other person, to adjust any of the dates and/or timeframes stipulated in these Rules, to the extent necessary, for purposes of verifying compliance by any entrant, Form or Entry with these Rules, or as a result of any technical or other problems, or in light of any other circumstances which, in the opinion of the Sponsor, in its sole and absolute discretion, affect the proper administration of the Promotion as contemplated in these Rules, or for any other reason.