2. ELIGIBILITY:
Contest is open to residents of Canada who have reached the legal age of majority in their province/territory of residence at the time of entry, except employees, representatives or agents (and those with whom such persons are domiciled, whether related or not) of Toyota Canada Inc. (the “Sponsor”), its parent companies, subsidiaries, associated and affiliated entities, prize suppliers, dealers, advertising/promotion agencies and any other individual(s), entity or entities involved in the development, production, implementation, administration or fulfillment of the Contest (collectively with the Sponsor, the “Contest Parties”).

3. HOW TO ENTER:
NO PURCHASE NECESSARY. There are two (2) ways to obtain an Official Contest Entry Form (the “Entry Form”) during the Contest Period, as follows:

4. ENTRY LIMIT:
There is a limit of one (1) Entry per person during the Contest Period, regardless of the method of entry. If it is discovered by the Sponsor (using any evidence or other information made available to or otherwise discovered by the Sponsor) that any person has attempted to: (i) obtain more than one (1) Entry; and/or (ii) use multiple names, multiple identities, multiple email addresses, and/or any automated, macro, script, robotic or other system(s) or program(s) and/or any other means not in keeping with the Sponsor’s interpretation of the letter and/or spirit of these Rules to enter or otherwise participate in or to disrupt this Contest; then he/she may be disqualified from the Contest in the sole and absolute discretion of the Sponsor. Your Entry may be rejected if (in the sole and absolute discretion of the Sponsor) the Entry Form is not fully completed with all required information and submitted and received in accordance with these Rules during the Contest Period. The Contest Parties and each of their respective officers, directors, agents, representatives, successors and assigns (collectively, the “Released Parties”) are not responsible for (and have no liability in relation to) late, lost, misdirected, delayed, incomplete or incompatible Entries (all of which are void). Facsimiles and/or photocopies of Entry Forms will not be accepted.

6. THE PRIZE AND APPROXIMATE RETAIL VALUE:
There will be one (1) prize (the “Prize”) available to be won consisting one (1) 2019 Lexus NX 300 F Sport Series 1 (the “Vehicle”) with an approximate retail value of $51,350.00 CAD. Prize includes destination/freight charges and all applicable fees and taxes.

Without limiting the generality of the foregoing, the following general conditions apply to the Prize: (i) Vehicle must be accepted as awarded and is not transferable, assignable or convertible to cash (except as may be specifically permitted by Sponsor in its sole and absolute discretion); (ii) no substitutions except are permitted, except at Sponsor’s option; (iii) Sponsor reserves the right at any time to substitute the Vehicle for any reason with a prize or prize component(s) of equal or greater retail value, including, without limitation, but solely at the Sponsor’s sole discretion, a cash award; (iv) colour and other specifics of the Vehicle will be at the sole and absolute discretion of the Sponsor and subject to availability; (v) manufacturer’s standard warranty, if any, applies to the Vehicle; (vi) upon notification, the confirmed winner will be required to personally take delivery of the Vehicle from a Lexus dealership or other location within Canada reasonably close to his/her place of residence in Canada as determined by Sponsor, in its sole and absolute discretion, and will be required to present adequate personal identification (in a form acceptable to the Sponsor – including, without limitation, government issued photo identification); (vii) Vehicle will not be released unless and until the confirmed Prize winner first shows proof (in a form acceptable to the Sponsor) of having a valid driver’s license (equivalent to a full “G” class license in Ontario) in the province/territory in which he/she resides and proof (in a form acceptable to the Sponsor) of satisfactory insurance; (viii) confirmed winner is solely responsible for all expenses that are not included in the Prize description above, including, but not limited to, registration and license fees, insurance, additional accessories and all other costs associated with: (a) any upgrade or option package(s) that he/she may request (and that may be permitted by Sponsor in its sole and absolute discretion); (b) obtaining a valid driver’s license, license plates, registration, insurance and/or fuel; and/or (c) taking delivery of the Vehicle.

None of the Released Parties makes any representation or offers any warranty, express or implied, as to the quality or fitness of the Prize awarded in connection with the Contest. To the fullest extent permitted by applicable law, the confirmed winner understands and acknowledges that he or she may not seek reimbursement or pursue any legal or equitable remedy from either the Sponsor or any of the other Released Parties should the Prize fail to be fit for its purpose or is in any way unsatisfactory. For greater certainty and the avoidance of any doubt, by accepting the Prize, the confirmed winner agrees to waive all recourse against the Released Parties if the Prize or a component thereof does not prove satisfactory, either in whole or in part.

8. ELIGIBLE WINNER NOTIFICATION PROCESS:
The Sponsor or its designated representative will make a minimum of three (3) attempts to contact the eligible winner (using the information provided on the Entry Form) within ten (10) business days of the Draw Date. If the eligible winner cannot be contacted as outlined above, or if there is a return of any notification as undeliverable; then he/she may, in the sole and absolute discretion of the Sponsor, be disqualified (and, if disqualified, will forfeit all rights to the Prize) and the Sponsor reserves the right, in its sole and absolute discretion and time permitting, to randomly select an alternate eligible entrant from among the remaining eligible Entries submitted and received in accordance with these Rules during the Contest Period (in which case the foregoing provisions of this section shall apply to such newly selected eligible winner).

9. ELIGIBLE WINNER CONFIRMATION PROCESS:
NO ONE IS A WINNER UNLESS AND UNTIL THE SPONSOR OFFICIALLY CONFIRMS HIM/HER AS A WINNER IN ACCORDANCE WITH THESE RULES. BEFORE BEING DECLARED A CONFIRMED PRIZE WINNER, the eligible winner will be required to: (a) correctly answer a mathematical skill-testing question without mechanical or other aid (which may, in the sole and absolute discretion of the Sponsor, be administered online, by email or other electronic means, by telephone, or in the Sponsor’s form of declaration and release); and (b) sign and return within ten (10) business days of notification the Sponsor’s declaration and release form, which (among other things): (i) confirms compliance with these Rules; (ii) acknowledges acceptance of the Prize (as awarded); (iii) releases the Released Parties from any and all liability in connection with this Contest, his/her participation therein and/or the awarding and use/misuse of the Prize or any portion thereof; and (iv) agrees to the publication, reproduction and/or other use of his/her name, address, voice, statements about the Contest and/or photograph or other likeness without further notice or compensation, in any publicity or advertisement carried out by or on behalf of the Sponsor in any manner whatsoever, including print, broadcast or the internet. If the eligible winner: (a) fails to correctly answer the skill-testing question; (b) fails to return the properly executed Contest documents within the specified time; (c) cannot accept (or is unwilling to accept) the Prize (as awarded) for any reason; and/or (d) is determined to be in violation of these Rules (all as determined by the Sponsor in its sole and absolute discretion); then he/she will be disqualified (and will forfeit all rights to the Prize) and the Sponsor reserves the right, in its sole and absolute discretion and time permitting, to randomly select an alternate eligible entrant from among the remaining eligible Entries submitted and received in accordance with these Rules during the Contest Period (in which case the foregoing provisions of this section shall apply to such newly selected eligible winner).

10. GENERAL CONDITIONS:
This Contest is subject to all applicable federal, provincial and municipal laws. The decisions of the Sponsor with respect to all aspects of this Contest are final and binding on all entrants without right of appeal. ANYONE DEEMED BY THE SPONSOR TO BE IN VIOLATION OF THE SPONSOR’S INTERPRETATION OF THE LETTER AND/OR SPIRIT OF THESE RULES FOR ANY REASON IS SUBJECT TO DISQUALIFICATION IN THE SOLE AND ABSOLUTE DISCRETION OF THE SPONSOR AT ANY TIME.

The Released Parties will not be liable for: (i) any failure of the Website or any other website, platform or device during the Contest; (ii) any malfunction or other problems of any nature whatsoever, including, without limitation, those relating to the telephone network or lines, computer on-line systems, servers, access providers, computer equipment or software; (iii) the failure of any Contest Entry and/or other information to be received, captured or recorded for any reason whatsoever, including, but not limited to, technical problems or traffic congestion on the internet or at any website; (iv) any injury or damage to an entrant’s or any other person’s computer or other device related to or resulting from participating in the Contest; (v) anyone being incorrectly and/or mistakenly identified as a winner or eligible winner; and/or (vi) any combination of the above.

By entering this Contest, each entrant expressly consents to the Sponsor, its agents and/or representatives, storing, sharing and using the personal information submitted for the purpose of administering the Contest and in accordance with Sponsor’s privacy policy (available at: http://www.lexus.ca/lexus/en/privacy). This section does not limit any other consent(s) that an individual may provide the Sponsor or others in relation to the collection, use and/or disclosure of their personal information.

The Sponsor reserves the right, subject only to the approval of the Régie in Quebec, to adjust any of the dates, timeframes and/or other Contest mechanics stipulated in these Rules, to the extent deemed necessary by the Sponsor, for purposes of verifying compliance by any entrant, Entry and/or other information with these Rules, or as a result of any technical or other problems, or in light of any other circumstances which, in the opinion of the Sponsor, in its sole and absolute discretion, affect the proper administration of the Contest as contemplated in these Rules, or for any other reason.

The invalidity or unenforceability of any provision of these Rules shall not affect the validity or enforceability of any other provision. In the event that any provision is determined to be invalid or otherwise unenforceable or illegal, these Rules shall otherwise remain in effect and shall be construed in accordance with the terms as if the invalid or illegal provision were not contained herein.

To the fullest extent permitted by applicable law, all issues and questions concerning the construction, validity, interpretation and enforceability of these Rules or the rights and obligations of participants, Sponsor or any of the other the Released Parties in connection with the Contest will be governed by and construed in accordance with the domestic laws of the Province of Ontario and the federal laws of Canada applicable therein, without giving effect to any choice of law or conflict of law rules or provisions that would cause the application of any other jurisdiction’s laws. The parties hereby consent to the exclusive jurisdiction and venue of the courts located in Ontario in any action to enforce (or otherwise relating to) these Rules or relating to this Contest.

Bass Pro Shops Canada – Win a grand prize of a 2020 Toyota Tacoma valued up to US$40,000 OR 1 of 2 minor prizes
Expired
Comment
Comment 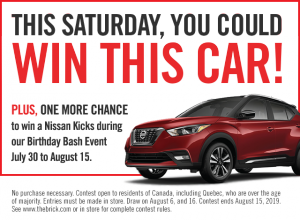 The Brick – Win 1 of 4 prizes including a 4K UHD TV; a Samsung Fridge; and more
Expired
Comment
Comment 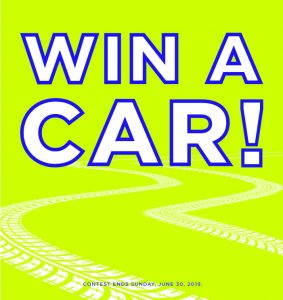 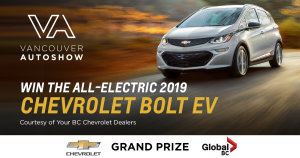 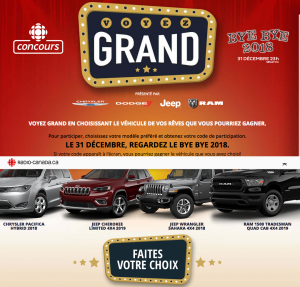